KingMike had a question about Zelda III A Link to the Past that seems to be an often-asked question by Zelda fans:

I’m sure I’m not the only who played ALttP since they were a kid and always wondered what Link’s uncle was trying to say about Zelda in the opening.

For reference, here are some screenshots (and thanks for taking them for me!):

And here’s the text in full:

So it looks like the Japanese text ends on a bit of a cliffhanger too, except the sentence subjects have been switched – In Japanese, he says, “You are the princess’…” while in English he says the reverse with, “Zelda is your…” So the translation is sort of a backwards version of the original.

What he intended to say isn’t 100% clear in either version, but if I were playing this for the first time ever, my initial instinct says that he was planning to say, “You are the princess’ only hope.” in the Japanese version.

I have no idea what the English localization was trying to go for, and I suspect that the localization writers didn’t really know, either. It’s been a few years since I last played through the game in English – did the localization ever answer this mystery it started? I’m guessing probably not, if it’s something English-speaking fans are curious about. It’s interesting how just a simple subject swap can create such a big puzzle as this 😛

Actually, this makes me wonder how this line was handled in translations to other languages. Were they based on this English translation, or did they work from the Japanese text? If anyone knows, please share your insight in the comments!

I also couldn’t help but notice that the Japanese version says the special sword attack is passed down among a certain clan, while the English version says it’s “handed down by our people”. Off the top of my head I don’t know if that results in any significant differences in the backstory or series continuity or whatever, but I thought it was interesting enough to note. 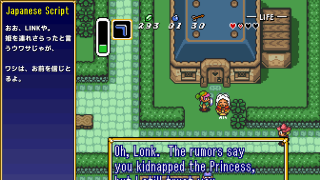 The Legend of Zelda: A Link to the Past – Live Japanese Script Viewer

This custom tool displays the Japanese script live as you play the English game. You can try it for yourself! 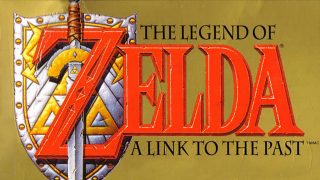 The Legend of Zelda: A Link to the Past (Live Translation Comparison)

Let's have some fun as we compare the Japanese and English differences in this smash-hit from Nintendo!

These are classic examples of how Japanese grammar and pronouns can have a profound effect on a translation.