The other day, a reader named Dave asked a question about Sonic stuff:

Hey man, I was curious about something Sonic related: In Generations, during the climax, The new and old Sonic are face-to-face with the new and old eggmans. The thing is, as we all know, the old Eggman was called Robotnik outside of Japan, and they actually make reference to this. Since he’s always been called Eggman in Japan I was wondering: How this was possibly re-written in Japan?

We already took a look at the “Dr. Robotnik eventually got changed back to Dr. Eggman” thing a few months ago, but this particular situation is pretty interesting so I thought it’d be neat to look into!

First, the scene in question is here:

And if you have a Nico Nico account you can see the Japanese version here.

So let’s take a look at the text side-by-side and see how they compare!

It looks like the heroes have reached some gigantic, scary-looking robot and one of the Sonics gives a standard attitude-filled line about it. Then the Robotnik/Eggman reveal begins:

So as you can see, the Japanese version just has Tails confused by there being two Eggmans, while the English release does the interesting Dr. Robotnik and Dr. Eggman thing. Based on this and the flow of the writing, I kind of almost want to believe that the English text was written first… and if not, then that’s some mighty sweet localization writing there!

Anyway, hopefully that answers the question about how this old localization change affected this new localization decision much, much later down the line!

If you enjoyed this article and know someone else who's a Sonic the Hedgehog fan, I hope you'll tell them about it. Word of mouth is what keeps this site running!
Follow @ClydeMandelin 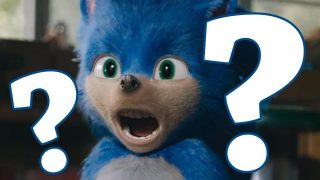