The Legend of Zelda: A Link to the Past – Live Japanese Script Viewer

Clyde Mandelin ‧ No Comments
NOTE: This little program is an old “is it possible to do this?” experiment I did a good while back. I’ve since developed a far better and customizable tool that can be used for any Super NES and NES game. I’m leaving this page up for reference and for interesting reading material, but be aware that this particular program is now ancient and outdated.

In late 2016 I threw together a quick program as an experiment. I wanted to see if I could take The Legend of Zelda: A Link to the Past (Super NES) and work some magic to display the Japanese lines of text whenever English lines text appeared. I posted about the entire process here.

Many readers asked to try the program out for themselves, but because it was a quick experiment, I had never intended it to be user-friendly or stable. Even so, I decided to add a little bit of error-checking and then upload it here for others to try:

Be sure to read the info below and/or the included README.TXT file before running the program!

This is an experimental program that displays the Japanese line from Zelda: A Link to the Past whenever an English line appears while running in an emulator. It’s very likely this won’t run on your system, as it was designed for a specific environment, but if you’d like to try it, try it at your own risk.

The program is a bare-bones “proof of concept” experiment. There’s no guarantee that it will work on your system/setup. It’s not intended to be user-friendly or receive any bugfixes/upgrades. I do hope to create a better, more customizable, general-purpose solution in the future. 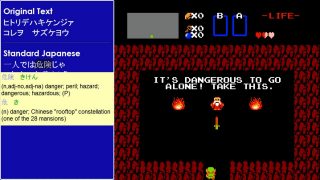 I glued a Super NES and NES emulator to a web browser to create a useful tool for fans, students, and others. 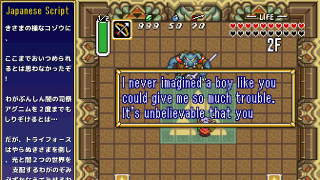