Behind the Localization of Majora’s Mask (Nintendo Power Magazine, Sep. 2000)

There are lots of great interviews out there about game localization that have faded into obscurity over the years, so I’ve started to build a collection of them to share with others. If you know of any other good interviews, let me know!

This is less of an interview and more of a localization journal by Jason Leung, the English screen text writer for The Legend of Zelda: Majora’s Mask. It was featured in the September 2000 issue of Nintendo Power, a few months before the North American release of the game. 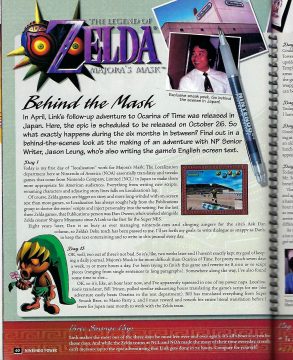 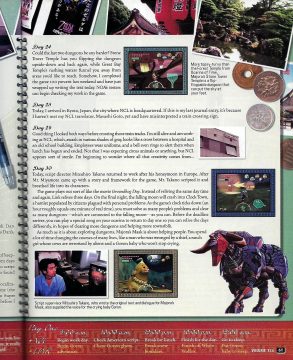 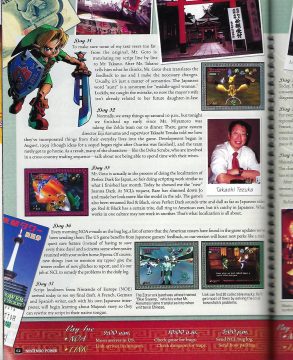 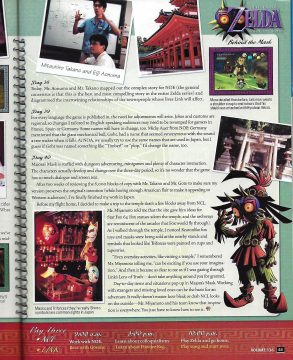 A transcription of the article is posted below for easier reading and reference.

In April, Link’s follow-up adventure to Ocarina of Time was released in Japan. Here, this epic is scheduled to be released on October 26. So what exactly happens during the six months in between? Find out in a behind-the-scenes look at the making of an adventure with NP Senior Writer, Jason Leung, who’s also writing the game’s English screen text.

Today is my first day of “localization” work for Majora’s Mask. The Localization department here at Nintendo of America (NOA) essentially translates and tweaks games that come from Nintendo Company, Limited (NCL) in Japan to make them more appropriate for American audiences. Everything from writing new scripts, renaming characters, and adjusting storylines falls on Localization’s lap.

Of course, Zelda games are bigger on story and more long-winded with on-screen text than most games, so Localization has always sought help from the Publications group to doctor the series’ scripts and inject personality into the writing. For the last three Zelda games, that Publications person was Dan Owsen, who’s worked alongside Zelda creator Shigeru Miyamoto since A Link to the Past for the Super NES.

Eight years later, Dan is as busy as ever managing nintendo.com and slinging zingers for the site’s Ask Dan column, so Zelda’s Deku torch has been passed to me. I’ll set forth my goals: to write dialogue as snappy as Dan’s, to keep the text entertaining, and to write in this journal every day.

OK, well, two out of three’s not bad. So it’s, like, two weeks later and I haven’t exactly kept my goal of keeping a daily journal. Majora’s Mask is far more difficult than Ocarina of Time. For pretty much seven days a week, 15 or more hours a day, I’ve been trying to finish this game and rewrite its 8,000 or so script pieces (ranging from single sentences to long paragraphs). Somewhere along the way, I’ve also found some time to slee…

OK, so it’s, like, an hour later now, and I’ve apparently squeezed in one of my power naps. Localization’s translator, Bill Trinen, pulled similar exhausting hours translating the game’s script for me (the adventure easily beats Ocarina in the text department). Bill had translated everything from Super Smash Bros. to Mario Party 2, and I must reword and rework his entire literal translation before I leave for Japan next month to work with the Zelda team.

Could the last two dungeons be any harder? Stone Tower Temple has you flipping the dungeon upside-down and back again, while Great Bay Temple’s rushing waters funnel you away from areas you’d like to reach. Somehow, I completed the game 100 percent last weekend and have just wrapped up writing the text today. NOA’s testers can begin checking my work in the game.

Today, I arrived in Kyoto, Japan, the city where NCL is headquartered. If this is my last journal entry, it’s because I haven’t met my NCL translator, Masashi Goto, yet and have misinterpreted a train crossing sign.

Good thing I looked both ways before crossing those train tracks. I’m still alive and am working at NCL, which, awash in various shades of gray, looks like a cross between a hospital and an old school building. Employees wear uniforms, and a bell even rings to alert them when lunch has begun and ended. Not that I was expecting circus animals or anything, but NCL appears sort of sterile. I’m beginning to wonder where all the creativity comes from…

Today, script director Mitsuhiro Takano returned to work after his honeymoon in Europe. After Mr. Miyamoto came up with the story and framework for the game, Mr. Takano scripted it and breathed life into its characters.

The game plays out sort of like the movie Groundhog Day. Instead of reliving the same day time and time again, Link relives three days. On the final night, the falling moon will crash into Clock Town, a hamlet populated by citizens plagued with personal problems. As the game’s clock ticks down (an hour roughly equals one minute of real time), you must solve as many people’s problems and clear as many dungeons—which are connected to the falling moon—as you can. Before the deadline arrives, you can play a special song on your ocarina to return to day one so you can relive the days differently, in hopes of clearing more dungeons and helping more townsfolk.

As much as it is about exploring dungeons, Majora’s Mask is about helping people. You spend a lot of time changing the courses of many lives, like a man who was wronged by a thief, a ranch girl whose cows are terrorized by aliens, and a Goron baby who won’t stop crying.

To make sure none of my text veers too far from the original, Mr. Goto is translating my script line by line to Mr. Takano. After Mr. Takano tells him what he thinks, Mr. Goto then translates the feedback to me and I make the necessary changes. Usually, it’s just a matter of semantics. The Japanese word “aunt” is a synonym for “middle-aged woman”. Luckily, we caught the mistake, so now the mayor’s wife isn’t already related to her future daughter-in-law.

Normally, we wrap things up around 10 pm, but tonight we finished up early since Mr. Miyamoto was taking the Zelda team out to dinner. There, game system director Eiji Aonuma and supervisor Takashi Tezuka told me how they’ve incorporated things from their everyday lives into the game. Development began in August, 1999 (though ideas for a sequel began right after Ocarina was finished), and the team rarely got to go home. As a result, many of the characters—like the Deku Scrubs, who are involved in a cross-country trading sequence—talk about not being able to spend time with their wives.

Mr. Goto is actually in the process of doing the localization of Perfect Dark for Japan, so he’s doing scripting work similar to what I finished last month. Today he showed me the “new” Joanna Dark. At NCL’s request, Rare has slimmed down Jo and made her look more like the model in the ads. The game’s also been renamed Red & Black, since Perfect Dark sounds trite and dull as far as Japanese titles go. Red & Black has a certain trite, dull ring to American ears, but it’s catchy in Japanese. What works in one culture may not work in another. That’s what localization is all about.

Every morning NOA e-mails us the bug log, a list of errors that the American testers have found in the game updates we’ve been sending them. The US game benefits from Japanese gamers’ feedback, so our version will boast new perks like a mid-quest save feature (instead of having to save every three days) and a cinema scene when you’re reunited with your stolen horse, Epona. Of course, new things (not to mention my typos) give the testers oodles of new glitches to report, and it’s our job at NCL to remedy the problems in the daily log.

Script localizers from Nintendo of Europe (NOE) arrived today to see my final draft. A French, German, and Spanish writer, each with his own Japanese interpreter, will begin learning about Majora’s story so they can rewrite my script in their native tongue.

Today, Mr. Aonuma and Mr. Takano mapped out the complex story for NOE (the general consensus is that this is the best and most compelling story in the entire Zelda series) and diagrammed the intertwining relationships of the townspeople whose lives Link will affect.

For every language the game is published in, the need for adjustments will arise. Jokes and customs are regional, so changes I tailored to English-speaking audiences may need to be revamped for gamers in France, Spain, or Germany. Some names will have to change, too. Micky Auer from NOE Germany mentioned that the giant mechanical bull, Goht, had a name that seemed synonymous with the sound a tree makes when it falls. At NOA, we usually try to use the same names that are used in Japan, but I guess if Goht was named something like “Timber!” or “plop”, I’d change that name, too.

Majora’s Mask is stuffed with dungeon adventuring, minigames, and plenty of character interaction. The characters actually develop and change over the three-day period, so it’s no wonder that the game has so much dialogue and screen text.

After two weeks of reviewing 8,000 blocks of copy with Mr. Takano and Mr. Goto to make sure my version preserves the original’s intention (while having enough American flair to make it appealing to Western audiences), I’ve finally finished my work in Japan.

Before my flight home, I decided to make a trip to the temple that’s a few blocks away from NCL. Mr. Miyamoto told me that the site gave him ideas for Star Fox 64 (fox statues adorn the temple, and the archways are reminiscent of the arcades that Fox would fly through). As I walked through the temple, I noticed Keaton-like fox toys and masks were being sold at the nearby stands and symbols that looked like Triforces were painted on cups and tapestries.

“Even everyday activities, like visiting a temple,” I remembered Mr. Miyamoto telling me, “can be exciting if you use your imagination.” And then it became as clear to me as if I was gazing through Link’s Lens of Truth—don’t take anything around you for granted.

Day-to-day items and situations pop up in Majora’s Mask. Working with strangers and missing loved ones can be the basis for an adventure. It really doesn’t matter how bleak or drab NCL looks on the outside—Mr. Miyamoto and his team know that inspiration is everywhere. You just have to know how to see it.

If you know of any other old interviews with game localizers, let me know! So many are lost and forgotten, so I hope to compile and share more here!
Follow @ClydeMandelin

In Japanese, a queen loses her beauty when she grows fat. This changed in English... but how?