Clyde Mandelin ‧ 9 Comments
I recently finished Horizon Zero Dawn for the PS4, along with its DLC content. I didn’t think I’d like the game at first, but I loved it so much I wound up putting almost 200 hours into it. And because the game was developed in English, the question “I wonder how they localized this line in the Japanese version” constantly came to mind as I played.

Unfortunately, I played for fun and not work, so I didn’t think to jot any notes down. So I only remember one specific line that I wanted to check out: the “grizzly” joke during one of the DLC quests.

The world has changed and very little knowledge of our modern age exists anymore. One NPC named Enjuku is fascinated by an old museum that features holographic animals – including one of a grizzly bear. Grizzly bears have gone extinct, so this museum’s display is the only source of info about their existence. 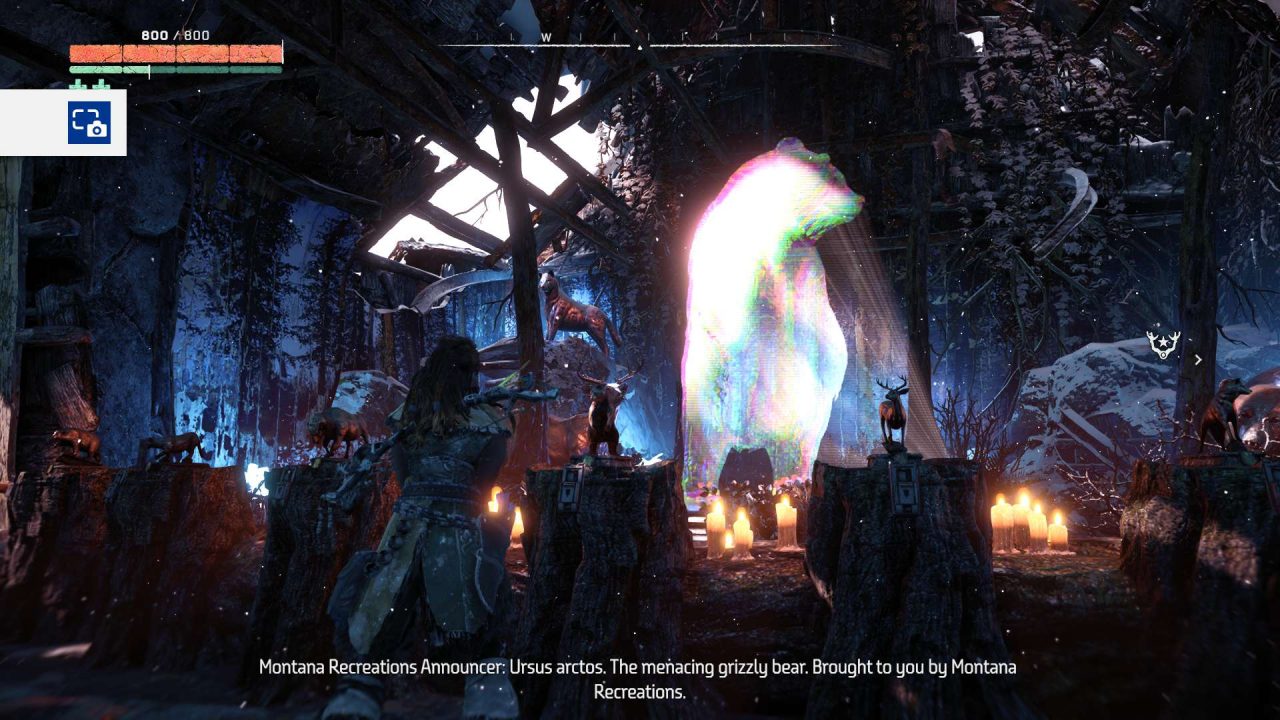 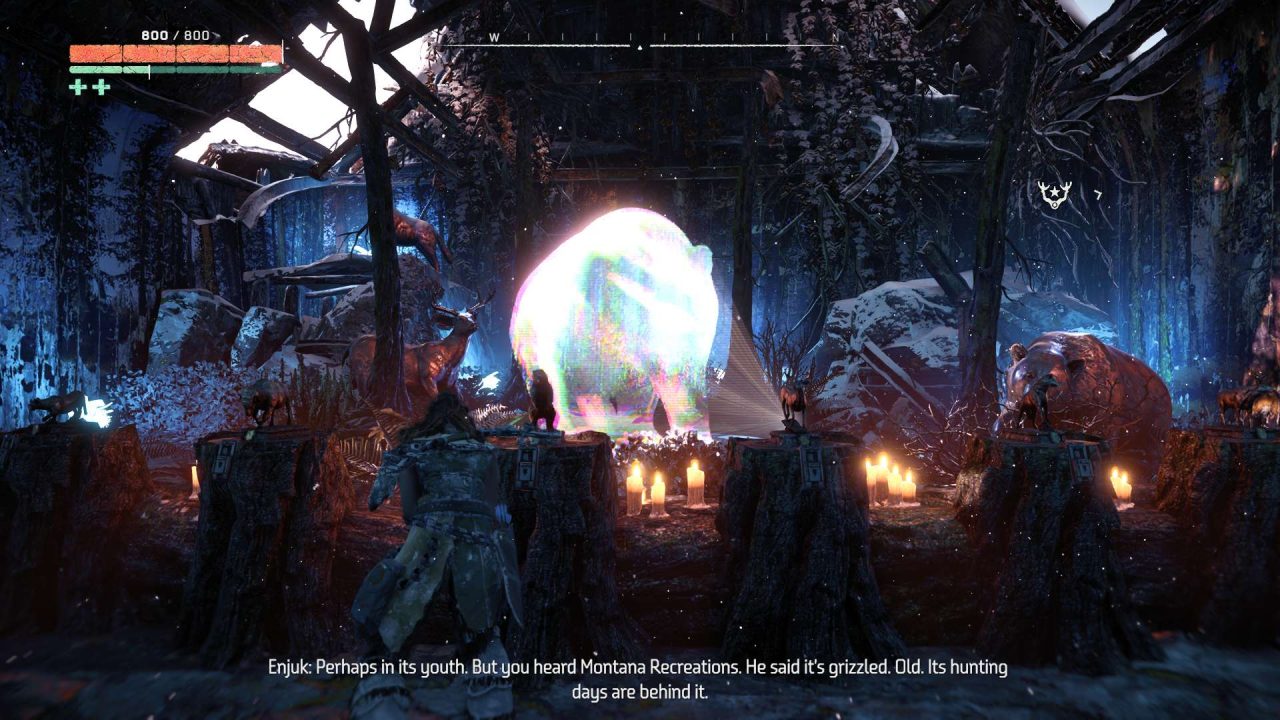 Aloy: Those claws look like they could rip someone in half.

Enjuk: Perhaps in its youth. But you heard Montana Recreations. He said it’s grizzled. Old. Its hunting days are behind it.

The joke here is that Enjuk makes an incorrect assumption about the English word “grizzly” in the bear’s name. Enjuk actually misinterprets the information about every animal in the museum, but I think this is the only one that involves wordplay. So I was immediately curious to see how it was translated into Japanese.

Grizzly bears aren’t native to Japan, so they’re usually called gurizurī – basically, the Japanese pronunciation of the English word “grizzly”. So how could a translator make this wordplay work in Japanese? I can think of a few options, but the final choice actually surprised me a bit.

First, it’s important to note that the Japanese language has its own scientific animal name classification system in addition to the standard Latin system – if you’re interested, there’s a great paper on the subject here. With this in mind, the translators changed the line by replacing the Latin name for grizzly bears with the Japanese scientific name for grizzly bears:

Announcer: KUMAKA. HIGUMA. The incredibly ferocious HAIIROGUMA. Brought to you by Montana Recreations.

KUMAKA equates to the “Ursidae” family in Latin, and HIGUMA is the Japanese equivalent of “Ursus arctos”. And HAIIROGUMA, the technical Japanese name for this bear, literally means “gray bear”.

It sounds kind of confusing because I have to jump between Japanese, Latin, and English to explain things, but by replacing the bear’s name this way, the translators paved a perfect opening for Enjuk’s response:

Aloy: Its claws look like they could rip a person in half.

Enjuk: Only in its youth. You heard Montana Recreations. He said it’s gray. It’s old. It’s retired from hunting.

Amazingly, this one tiny change makes the joke work almost exactly as the original!

Jokes usually change quite a bit in translation, so I was surprised to see how close this one stayed to the original. The translators deserve credit for figuring out this solution, and whoever decided to call grizzly bears HAIIROGUMA back in the day is why this solution works in the first place. I’m not sure who chose HAIIROGUMA back in the old days, but I’m guessing the choice to go with “gray bear” partially relied on the English name “grizzly bear”, given that “grizzled” can mean “gray”.

Anyway, this was just one tiny line in a huge game, and while it’s nothing earth-shattering to read about, I’m glad I looked into it. I learned some neat things I never would’ve known otherwise, and hopefully you did too!

I’d love to look at Horizon Zero Dawn’s Japanese translation some more sometime, so if you can think of anything I should look at, let me know in the comments or on Twitter.

Also, if you liked this look at English-to-Japanese game translations, I think you'll get a kick out of my look at Japanese Grand Theft Auto translations and how Bubsy got translated into Japanese!

3 Examples of Translated Jokes That Don’t Work at All

Japanese puns can be hard to localize... but the localizers really dropped the ball in this case.

How The “Litter Joke” Was Reworked in Dragon Warrior IV

The English release of Dragon Warrior 4 features a forced pun. What was it originally in Japanese?

How the Resident Evil 5 Door Pun Is Handled in Japanese

What does a sarcastic one-liner in English look like in Japanese?