(Warning: If you’re offended by swear words, turn back now!)

One of these days/years I hope to take a detailed look at Final Fantasy VI with a full-blown analysis project, but until then I might take tiny peeks at specific parts once in a while. Today I had the sudden urge to look into the famous “son of a submariner” line that Kefka shouts early on in the game – so let’s check it out!

Basically, Terra, Locke, and Edgar have escaped Kefka and his henchmen. Kefka is really mad and shouts out as they run by on Chocobos:

Kefka starts off in Japanese by making a certain sound of annoyance or frustration – I’m not sure we have a good equivalent in English… maybe something like “Argh!” is the closest thing I can think of, but it’s not quite the same. In any case, this was taken out of the translation, which I think is fine.

The next thing we see is that he swears! In actuality, Japanese doesn’t have swearing quite like we do in English and other languages, so this is a bit hard to explain. I’ve touched on it briefly before in my MOTHER 3 analysis so I’ll skip the details for now, but basically (kuso) can run the gamut of “gee wiz” to “darn” to “fuck”, depending entirely on context, the translator’s experience, etc.

So in my sample translation above I have “damn it”, but it can be translated many different ways. In the official translation it looks like it was going to be “son of a bitch”, but it had to get changed slightly due to Nintendo’s content policies. I’d be curious to know if it was self-censored during the translation phase or if it had to be fixed after the fact, I’ll have to ask about that someday. Self-censoring is another topic I should write about someday, actually. It’s a pretty big topic.

Anyway, so that’s the deal with “son of a submariner”! I think the most interesting thing of all is that this little, insignificant, unmemorable line in the Japanese version became an often-quoted, memorable, and somewhat controversial line in English. Man, I can’t wait to dig into this game in more detail someday, particularly to see what Japanese lines turned out really memorable among Japanese fans but not nearly as memorable in English!

Oh, you know what? I just realized maybe I should’ve taken a look at the fan translations and the other official translations of this line too. I’ll probably do that someday, but if anyone can provide more insight/pics for now, share it in the comments 😀 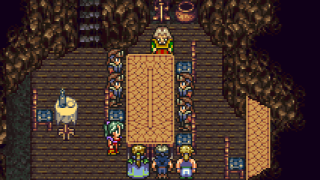