The Duchess’ Riddle in the Japanese Version of Witcher 3

There’s a DLC quest in The Witcher 3 that revolves around a very language-specific, nearly untranslatable riddle. I’ve only played the English version of the game, so I was curious to see how the riddle works in Japanese. Let’s take a look!

Incidentally, although The Witcher 3 is a Polish game, I’ve read that the game’s English text was written concurrently with the Polish text, to make localization into other languages easier. I assume this means the Japanese localization is, to some degree, based off of the English text, but I’m not sure. If anyone knows more, let me know!

At a gala during the “Beast of Toussaint” quest, you need to solve a riddle to find where another character is hiding. In English the riddle is:

I begin like a groan hollowed out with ease, then end like a mouse with a head of hard cheese. 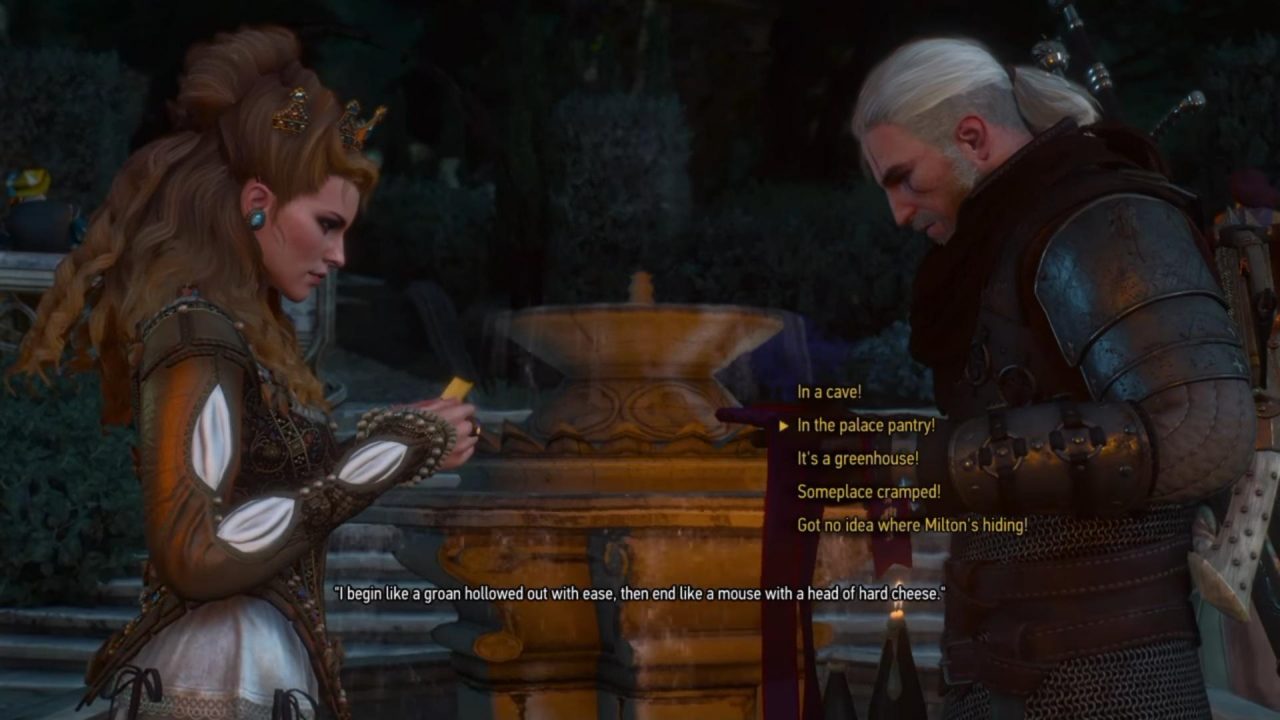 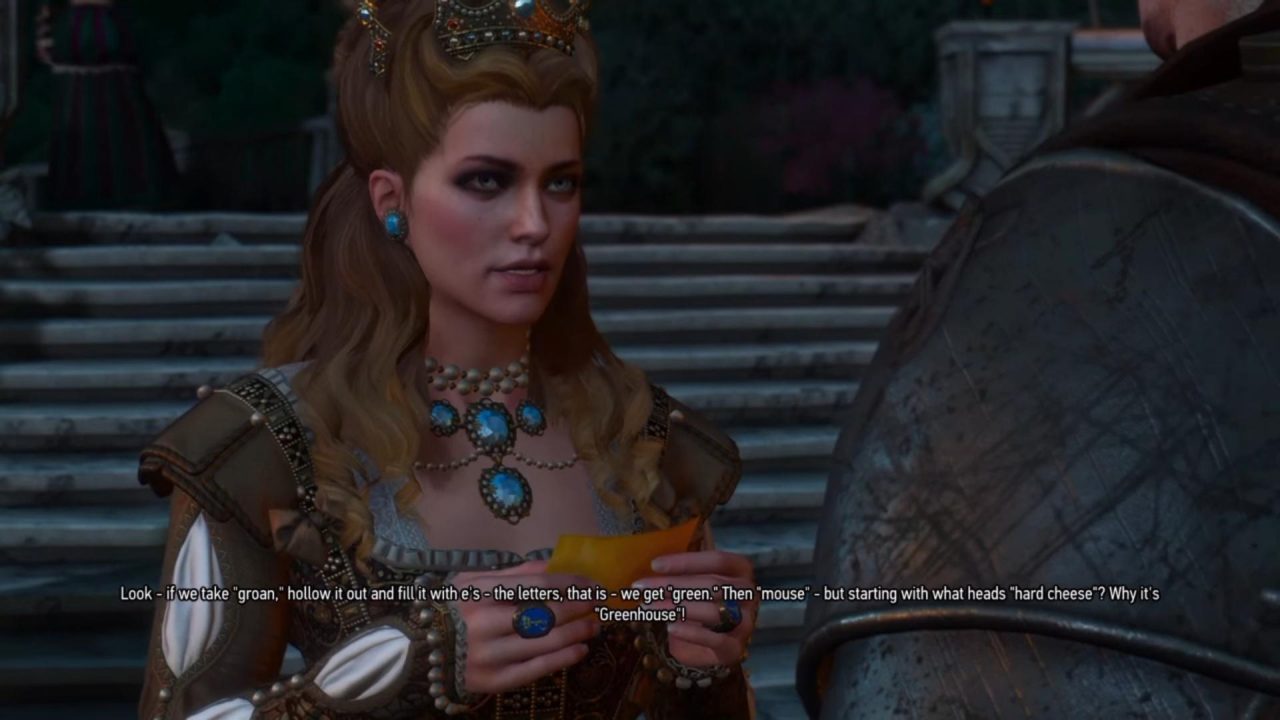 The first part of the English riddle works this way:

The second part of the riddle works this way:

Then, combining the two words, you get “greenhouse”.

The words used in the riddle are also meant to throw you off when you get to choose your final answer. Because the riddle involves mice and cheese, for example, you might think it’s referring to a place where food is stored. In short, the wording of the riddle is meant to lead you to the word “greenhouse” while also pushing you toward specific incorrect solutions.

Rather than focus on the literal words of the riddle, the Japanese localizers focused on conveying the original intention instead: playing with the current language’s writing system to produce the answer of “greenhouse”. 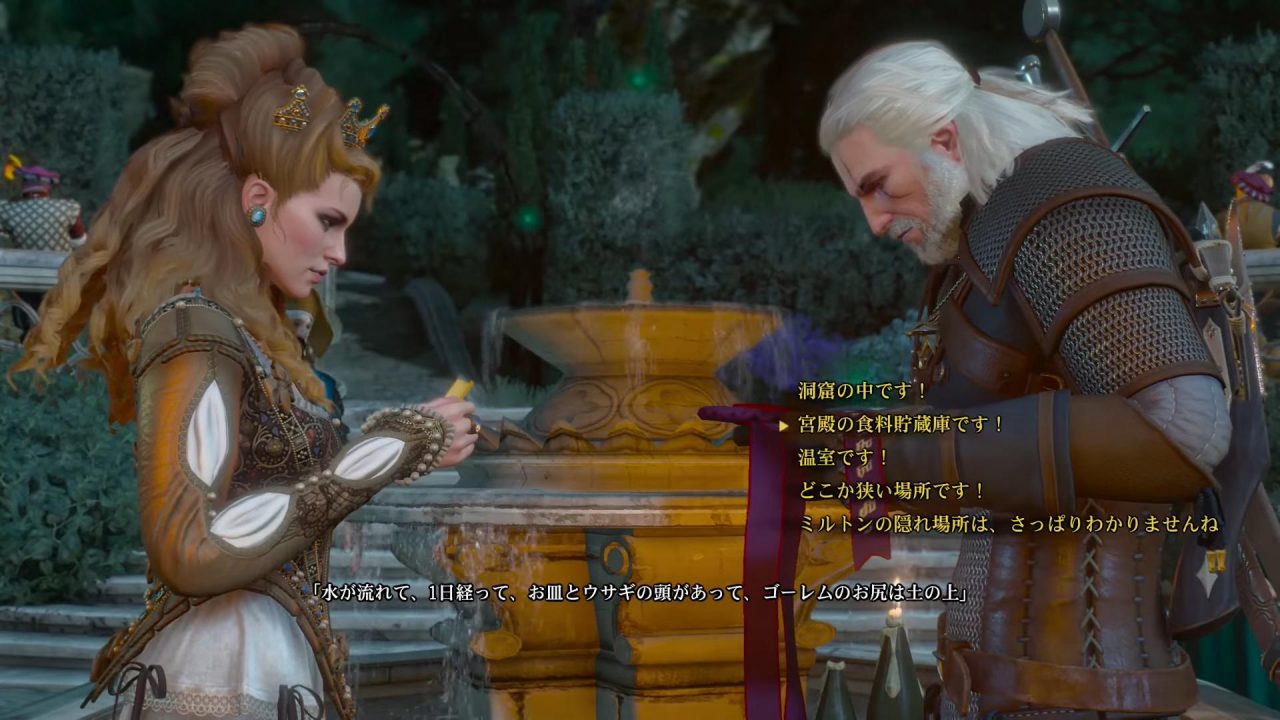 The Japanese riddle: "With water flowsing and a day gone by, a dish, a rabbit's head, and a golem's rear sit atop the earth." 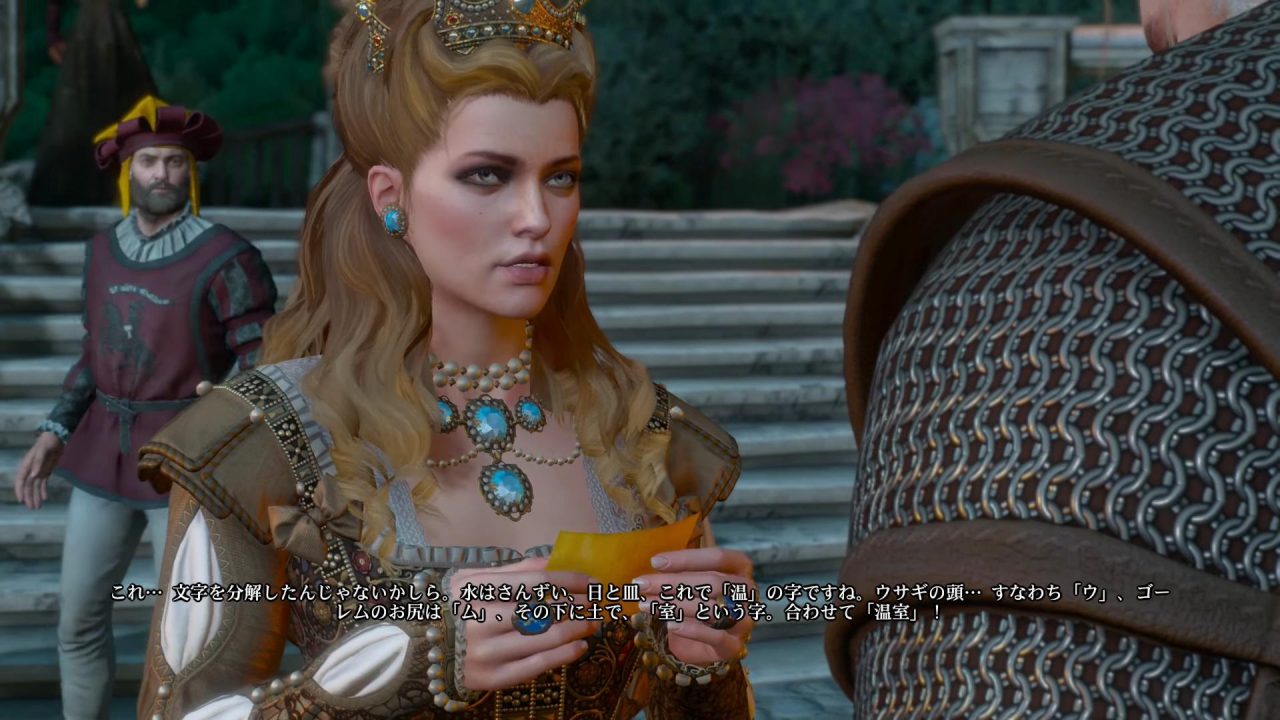 The Japanese solution: "'Water' is 氵, and together with 日 and 皿, you get 温. The rabbit's head... which is ウ, and the golem's rear, which is ム. Below them is 土, which all combine to make 室. Put together, you get 温室."

The first part of this Japanese riddle suggests combining the following characters:

There happens to be a simple Japanese character that contains all three pieces: 温, which means “warm”.

The second part of the Japanese riddle takes a bit more explanation but is similarly broken into three parts:

As before, the riddle suggests combining the indicated characters, which in this case are ウ, ム, and 土. And there is a Japanese character that roughly contains all three stacked on top of each other: 室, which means “room”.

Putting our two full Japanese characters together gets us 温室 (onshitsu), which means “greenhouse”.

The Japanese riddle is basically completely different, yet still leads to the same solution. At the same time, some of the words used also deceptively point to incorrect solutions. The use of the word “earth” seemingly suggests the cave answer, for example.

In this way, the Japanese riddle is different from the English riddle, yet works in its own unique way to follow the spirit and goal of original riddle. It’s a good example of localization at work – a creative solution to something that doesn’t work in a literal translation.

It appears that the Japanese version of this riddle often gets mentioned when gamers discuss good English-to-Japanese game localizations. Just for fun, here are a variety of comments from Japanese articles, message boards, and Twitter, translated into English:

Just a phenomenal translation. This is originally a Polish game?!

Witcher 3’s translation really is exquisite. Every time I see such carefully crafted localization choices in it, I can’t help but feel that the translator (or whoever directed the translation) was a true blessing for this Western game. They loved not just the game itself, but every single bit of writing in the game too.

Every once in a while I run across such great translations in the Witcher that make me wonder “What could the original text have been?”

I never expected to see a kanji-based riddle in a Western game. What an incredible localization.

I didn’t realize it was a kanji riddle at the time, but I managed to get it right just by the general feeling of the words used. I bet a lot of people were confused though, not expecting the localization to be that thorough.

I haven’t finished The Witcher 3 yet in English, but after looking at this one little topic I already want to replay the entire thing in Japanese sometime. Plus, as touched on in this older article, it sounds like the Japanese version is considered legendary. I wonder what other localization gems are hiding in there.

Now that I think about it, I’m sure you could write 80 books about all of the various localization choices and differences between all the versions of just this one Witcher game. I hope someone does someday. For now, if you know how this riddle worked in the Polish version or in any other languages, let me know in the comments!

Incidentally, if you're interested in English-to-Japanese game translation stuff, here's a summary of what Japanese players have said about other Japanese-to-English game localizations.

Or, if you've ever wondered if Japanese gamers have their own "ALL YOUR BASE ARE BELONG TO US"-esque translations, see here! 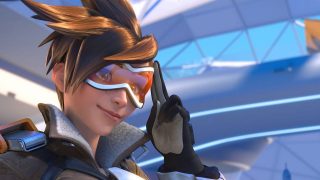 Japanese gamers play a lot of Western-made games, so which ones have the best localizations?