Clyde Mandelin ‧ 52 Comments
In 2001, a ROM translation group named “DeJap” released a fan translation of Tales of Phantasia, a 1995 JRPG for the Super Famicom.

As one of the later games in the Super Famicom/Super NES era, Tales of Phantasia is incredibly impressive in terms of gameplay and in terms of technical wizardry – it even features a fully voiced, anime-style intro song!

Unfortunately, the game was never released for the Super NES, and it remained of of those unattainable Japanese holy grails for a long time. So it was naturally a huge deal when DeJap finally released a full English fan translation patch.

For clarification, back in the early 2000s, I translated the scripts for two games that DeJap did the reprogramming for: Bahamut Lagoon and Star Ocean. I wasn’t involved in this Tales of Phantasia project in any way, which began a year or two before I decided to become a translator.

I haven’t played this fan translation very much myself, but there’s one line in the translation that everyone seems to remember:

I’ve seen mixed reactions to this line over the years – some people love it, some people hate it, some feel it’s disrespectful to the original, and others are ambivalent. But the topic still comes up all the time today, 18 years later, so I figured it’s about time I experience this line too. So let’s take a look and compare!

As you might guess, this article could be a bit NSFW for some people. There’s nothing terrible, but I thought I’d say something just in case.

The Scene In Detail

For context, it’s helpful to see the full scene in action beforehand, so I’ve compiled three versions of this scene for reference:

So, at this point in Tales of Phantasia’s story, the heroes – Cless, Klarth, Mint, and Arche – need to get to Alvanista by ship. Nobody wants to sail that way, though, because of war stuff going on.

Talking to the Captain

When you first talk to this ship’s captain, he refuses help. That’s when Arche tries to charm him into agreeing:

Arche takes offense at the captain’s response and shouts:

The scene changes, and the four party members are now standing on the ship, looking out at the ocean:

The fan translation completely changes Mint’s line here, although I’m not sure why.

Before Cless can answer, Klarth adds his own thoughts on the matter:

This line in the fan translation instantly became famous, and I still see screenshots and posts about it to this day. As we can see, the original Japanese text doesn’t have nearly the same level of crudeness.

Incidentally, the Japanese script underwent rewrites for later ports of Tales of Phantasia. As a result, this line about Arche also changed very slightly too: 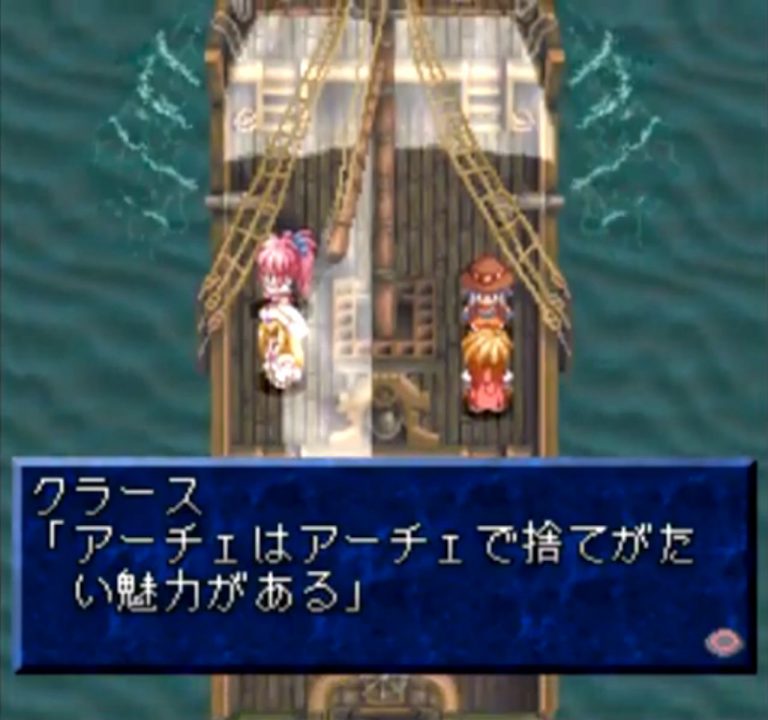 "And Arche has an irresistible charm of her own." (PlayStation version, 1998) 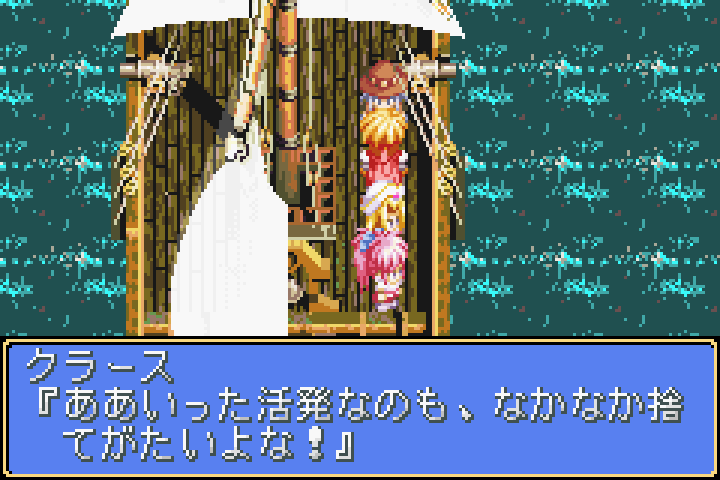 "As for Arche, she has a liveliness to her that's hard to turn down too!" (Game Boy Advance version, 2003)

We can see that these variations aren’t as crude as this fan translation either.

Anyway, this line about tigers is the main one everyone focuses on, but there’s actually more to look at. Here’s how the rest of this scene unfolds:

As we can see, the fan translation punches things up here as well. It even adds a new line at the end that isn’t in the original text.

After this, Arche interrupts:

Here, we can see that the fan translation includes more text changes, a line reassignment, and an entirely new line out of nowhere.

After this, the scene cuts back to some main story stuff, and the heroes meet a fellow adventurer named Meia.

The heroes head into the ship to get some food. They decide to drink with Meia. As time goes on, some characters get really drunk, including Arche.

At one point, Cless notices how much Arche has had to drink:

Here we see that Cless’ internal thinking was replaced with actual dialogue. After seeing this, I remembered that the head of DeJap once mentioned that parts of the fan translation were based on the PlayStation script and not always the Super Famicom script. So I checked the PlayStation version of this scene, and yep, that’s precisely what happened here:

However, this seems to be the only thing that matches the PlayStation script – everything else seems to be an original DeJap creation.

Anyway, as the night wears on, Klarth and Meia get really drunk:

The fan translation then inserts some more text not present in the original script:

Arche has had so much to drink that she’s dozed off. But she suddenly interrupts the conversation by talking in her sleep:

Arche then falls back asleep, and Klarth and Meia discuss a bunch of story stuff. After a few minutes of this, Arche suddenly interrupts with some more sleep-talk:

In Japanese, these outbursts from Arche are intended to be lighthearted and funny – she’s having a flirty, sexy dream about Cless.

Klarth and Meia decide to call it a night. Klarth tries to wake up Arche:

This text change is followed by another one:

Lastly, Klarth thinks to himself:

As we can see, the DeJap fan translation changes a lot of what’s said in this scene.

Tales of Phantasia has been ported many times to many different systems, but it’s only ever received two official English translations. The game has also received two other fan translations that I know of, both of them for the PlayStation release.

Tales of Phantasia received its first official English translation in 2006, when it was released for the Game Boy Advance. The GBA translation of this Arche scene stays pretty close to the original Japanese text throughout.

Here are some example screenshots: 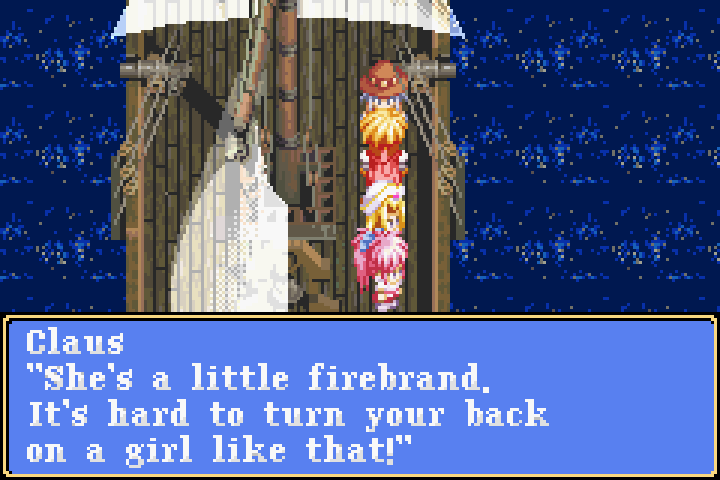 "She's a little firebrand. It's hard to turn your back on a girl like that!" 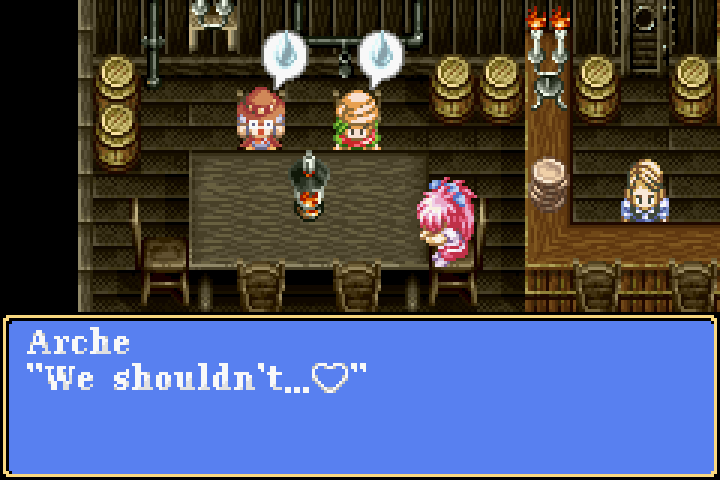 Many of these Game Boy Advance lines closely match my own basic translations above. The only noteworthy thing is that Arche’s drinking was removed.

Tales of Phantasia also received an official translation in 2014, when it was released for iOS devices. Unfortunately, this version is no longer available, so I’m not sure how it handled this scene involving Arche. If anyone knows, please let me know!

In 2007, Gemini and throughhim413 released a fan translation for the PlayStation port of Tales of Phantasia. Here are some example screenshots from this scene: 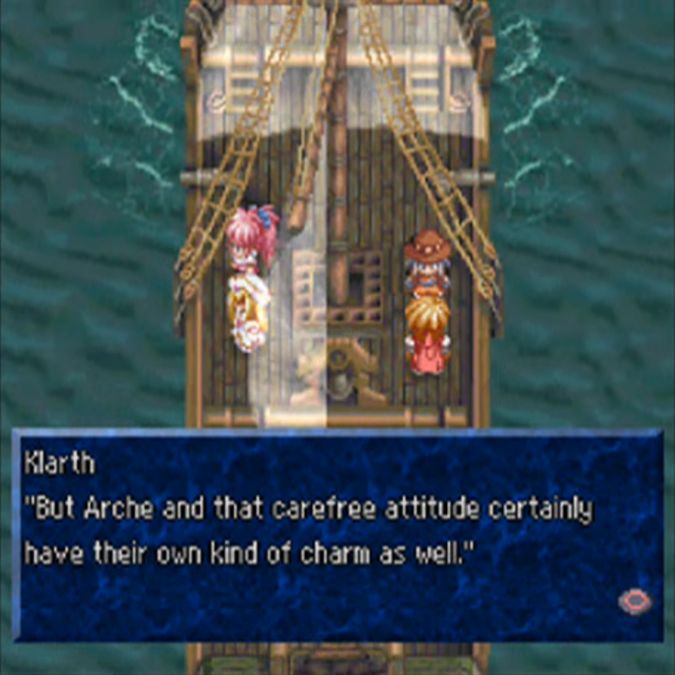 "But Arche and that carefree attitude certainly have their own kind of charm as well." 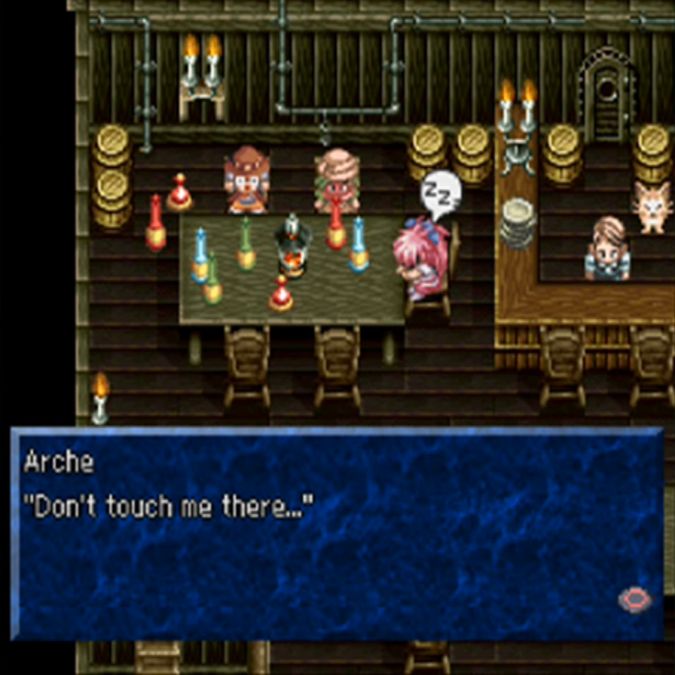 In 2012, Phantasian Productions released its own fan translation for the PlayStation port. Here are some screenshots from this Arche scene: 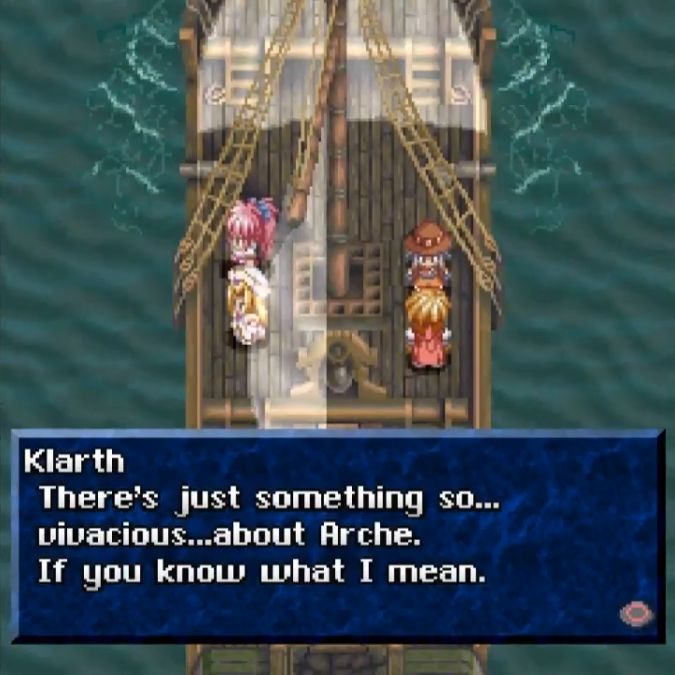 "There's just something so... vivacious...about Arche. If you know what I mean." 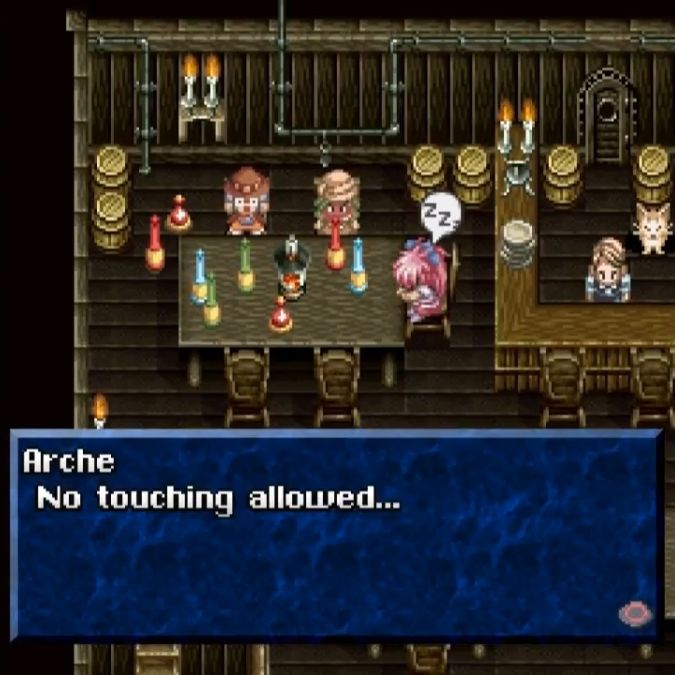 Honestly, I’m not very familiar with any of the fan translations, so I don’t know what each team was aiming for. But from this one scene alone, I can tell that they each handled this infamous scene in their own unique way.

Even after all this time, I regularly see this scene from Tales of Phantasia mentioned in online discussions, so hopefully this short little comparison will be helpful for future reference.

The original DeJap fan translation clearly deviates from the original Japanese script in this scene, sometimes in surprising ways. I’m not much a fan of this style myself – it definitely feels more like adaptation than translation or localization. But everyone is different, and I know many gamers who do enjoy this style. Luckily, in the case of Tales of Phantasia, gamers have multiple options available to choose from.

Anyway, after looking at all these different versions of Tales of Phantasia, I’m now curious to see how the rest of the game was handled in translation. Maybe this calls for a Wanderbar playthrough of the game someday – that’d be fun I bet!

If you liked this article and are a Tales fan, check out my other Tales articles here. Or, if you just want to read about how other famous game quotes got translated, see here! 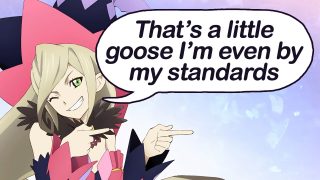 This Be Bad Translation #08, Tales of Berseria!

This big-name, modern translation is bursting with post-game problems.

How a Kangaroo Accidentally Appeared in Tales of Phantasia’s Translation

This is a last-minute nightmare scenario for any modern game translation team.