Cecil and his companions head to a cave that leads back inside the Tower of Babil. Inside the cave, they encounter the survivors of the Eblan kingdom.

For years and years, I’ve always been confused – is the ninja kingdom in this game called “Eblan” or “Eblana”? Or is “Eblan” a descriptive word, sort of like how “American” describes something from “America”? It turns out there’s a good reason for my confusion all this time: the original English translation is inconsistent.

In the original English translation, the castle is simply called “Eblan” while the cave is called “Cave Eblana”. Characters refer to the name “Eblan” and nothing else.

In short, it seems that the cave is the only place in the original translation that retains the “Eblana” name – the name changed to “Eblan” everywhere else for unknown reasons.

Incidentally, it turns out that “Eblan” is the only name used in every translation of the game after the 1991 translation:

So it looks like every other translation has jumped onto the “Eblan” bandwagon instead of “Eblana”. This seemed curious to me, so I checked the official Japanese data books and they all use “Eblana”. Even the super-detailed book with carefully spelled names spells it as “Eblana”:

So I guess at some point the choice to call it “Eblan” in the English translations took hold. If I had to guess, the seed of this “Eblan” spelling began with the original translation and became solidified when the PlayStation translator was like, “Hey, why does the original game say ‘Eblan’ and ‘Eblana’? It should be one or the other!”

Regardless of the reason, the “Eblan” name has survived since the original translation, just as “Golbez” and “Spoony Bard” have survived all this time.

After passing through a monster-filled area in the cave, Cecil’s party reaches the undergound ninja settlement. A guard stands at the entrance and says in Japanese, “Who’s there?! Oh, whew, you’re human!” He says the same thing in English, but in sort of the reverse: “Ah! Thought you were monsters!”

We’ve seen how the game’s translators had to shorten text in creative ways or drop certain bits of text altogether. This entire section of the game was hit especially hard by the scissors of editing – even short, simple words got trimmed until only the bare-bones information remained. Luckily, this part of the game is short and doesn’t heavily impact the main story, but here are a few examples of these “short cuts” in action.

First, this guard’s optimism and pride in the face of annihilation is missing in the translation:

The urgency of the situation – and the important fact that very few survived Baron’s assault – is mostly missing in this translation:

This guard’s anxiety for the future remains mostly intact in this trimmed translation:

This boy’s motivation feels weaker in the translation, possibly because he’s now only focused on one specific person and not two:

And this character’s confidence and desire for revenge is murkier in translation:

In the English translation, everyone here refers to Edge as “the prince” or “Prince”. In Japanese, the word used is waka / wakasama, which is sort of like our phrase “Young Master” in English. “Prince” isn’t wrong here, but waka in this context evokes an image of a young lord in ancient Japan. This indeed fits with the ninja theme of this kingdom.

In contrast, the people of Damcyan refer to their prince as ōji, which is closer to the Western-style “prince” that we’re familiar with and evokes images of regal throne rooms and crowns and all that.

Basically, I just wanted to point out that there are multiple types of “princes” in the game, but they get painted as one and the same in translation.

In the Japanese version, the fate of the king and queen is left unstated. It almost seems to suggest that they were killed – or at least abduction probably wouldn’t be the first thing most people think of. So when you encounter the king and queen later, it comes as a surprise – they’re not dead after all! But then that surprise turns to horror when you realize they’ve been changed into hideous abominations.

A little girl talks about the prince:

As with many other lines in this area of the game, a chunk of text has been lopped off. The girl’s text is also a bit different in English, but it’s nothing too noteworthy.

This line also contains a problem that plague’s this area’s text: titles like “Prince”, “King”, and “Queen” get capitalized when it’s unnecessary. This common mistake was fixed in the PlayStation translation and every later translation.

An old man in the refugee room has some important information:

Clearly a lot of text has been cut out here as well. Two main things surprise me:

In Japanese, this old man also gives the player an idea of what to expect the prince to act like.

Many of the treasure chests in these caves were changed for the Easy Type and Super NES versions:

The “Blood Sword” from the original game actually uses the English words “blood” and “sword”. It was renamed in the Easy Type version to have a 100% Japanese name that means “bloodthirsty sword” or “starving for blood sword”. Blood references were probably against Nintendo of America’s guidelines at the time, hence the change to “Drain Sword”.

In the original Japanese version, a wounded guard says, “The Young Master went all by himself!”

I haven’t been keeping tabs on when the translation uses the original version as a base and when it matches up with the Easy Type version, but I’m starting to get the feeling it might’ve been a bit messier and less clear-cut than I originally expected.

In Japanese, Prince Edge uses the rough, masculine pronoun ore to refer to himself. On top of that, he adds the name suffix “-sama” to his own name, which is the height of arrogance.

These two language markers get lost in translation, so the very first English scene with Edge lacks the same “oh, okay, this is a really rude and masculine guy who also has a huge ego” punch that’s found in the Japanese script.

We also see that Edge calls himself ōji here. This suggests that ōji and waka are fairly synonymous in the world of Final Fantasy IV after all, although my gut instinct tells me that a waka probably wouldn’t refer to themselves as waka in most situations anyway.

A battle scene begins between Rubicante – one of the four elemental fiends working for Golbez – and Prince Edge. Edge is angry and wants revenge for his parents. He unleashes a special fire technique on Rubicante, but it causes little damage. In response, Rubicante taunts Edge and uses a devastating fire attack of his own.

The translated dialogue during this battle was trimmed a lot because battle dialogue can only fit in one line at a time.

Rubicante then uses a powerful fire technique of his own that nearly kills Edge. In English, this technique is called “Glare”. In Japanese, it’s known as (kaeryū).

Unfortunately, the Japanese term kaenryū remains ambiguous in all ports, remakes, spinoffs, and crossovers of Final Fantasy IV, so there isn’t a clear translation of its name. Potential meanings include “Flame Current” and “Flame Dragon”, among many others. Here are more examples of かえんりゅう in later games: 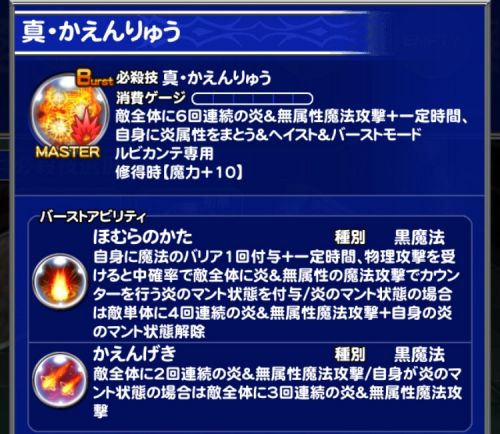 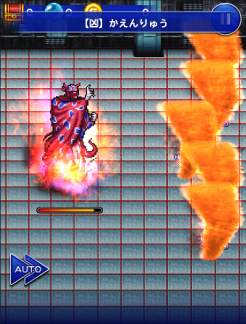 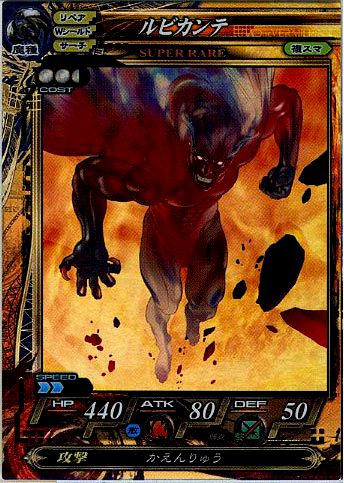 Normally, you’d expect something like this to get written in kanji once game consoles got more powerful, but it’s remained in hiragana for nearly 30 years now.

After Edge is defeated, he shouts a rough equivalent of “D… Damn you!” in Japanese. In fact, “damn” is an extremely common translation for the word used here.

In the English translation, this became “Blast… you!”. Something about the way it’s presented and phrased here makes me think that it might’ve originally had “damn” in there during pre-release scripts but was revised to “blast” before the final release, similar to some of the other pre-release content changes we’ve seen before, such as the removal of “blood” in the Agart observatory.

Rubicante leaves. Cecil and his friends go to Edge’s aid:

During this piece of the full scene, two things stand out:

There are two lines in this scene that were changed for the Easy Type release too.

First, we see that a quote about Rubicante being “the most powerful of the Four Heavenly Kings” had some basic rearrangement to make things a tiny bit clearer in the Easy Type script.

And an intentional spelling variation in the word ("pretty") was turned back into its standard form for more proper reading.

The old Eblana retainer guy has a new line if you return with Edge in your party. In the English translation, he says, “We will hold out here.” but in the Japanese script, it’s actually, “I will take care of things here for you!” Perhaps this text change is another reason why I never really noticed that this guy is the same guy that nags Edge throughout the rest of the game.

The guard at the entrance to the cave also has a new line once Edge is in your party:

In Japanese, it’s common to refer to the listener in the third person, kind of like if you were talking about the listener while the listener wasn’t in the room. Normally, a translator will pick up on this and convert it back into the second-person when necessary.

This third-person vs. second-person thing seems to be why this guard talks about Edge in the third-person when he’s right there in your party. The translation also trimmed the guard’s line down so much that the line took on a new meaning too.