The heroes are back underground, but this time they have a fancy new airship. They fly to the dwarves’ castle and inform the king of the current situation.

The last crystal is stored inside the Sealed Cave, and you need a special key to get inside. The Japanese script has an extra little detail that’s absent in the English script, though:

In other words, the Japanese text suggests that the cave has some level of cognition or agency. It’s not just a standard lock-and-key system, basically. Which makes sense, given that all the doors inside the cave are alive, and a giant wall in the cave comes alive to try and kill the heroes.

A dwarf explains that there’s a secret cave somewhere in the Underground. The English script adds an entirely new window of text that explains how to safely navigate the secret cave once you get inside:

This additional text isn’t in the Japanese Easy Type script either – it’s completely unique to the English release. I wish I could peer back in time and see who made the decision to add this text, and why specifically. My best guess is that some testers or focus group people had major problems getting through the cave.

The Underground is filled with an “ocean” of hot, molten rock. In Japanese, the word used for this molten rock is (yōgan), which can be translated as “magma” or “lava”. 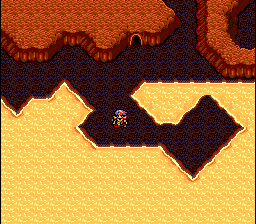 In the Underground, the molten rock is a lot like a big ocean 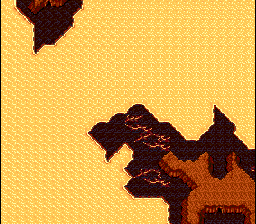 The molten rock animates as if it's flowing like water, and there are even islands in it

The thing is, in English, there’s a difference between magma and lava. The easiest way to remember it is “magma = “mass”, and “lava = liquid”. Magma is the molten rock that’s found deep underground. Lava is what flows up into volcanoes and spurts out from the ground.

Despite this technical difference, it’s common to see “magma” and “lava” mixed up and used interchangeably. This can even be seen in the English version of Final Fantasy IV: 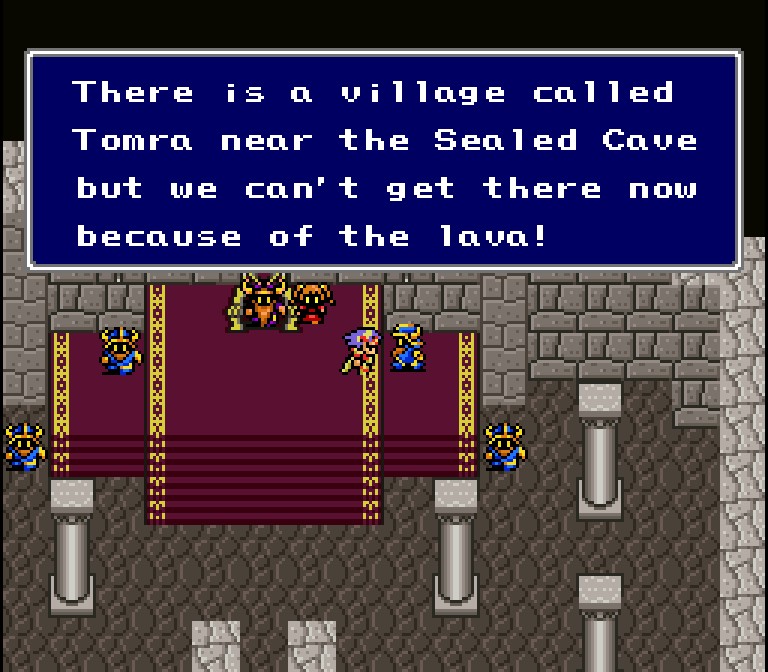 "we can't get there now because of the lava" 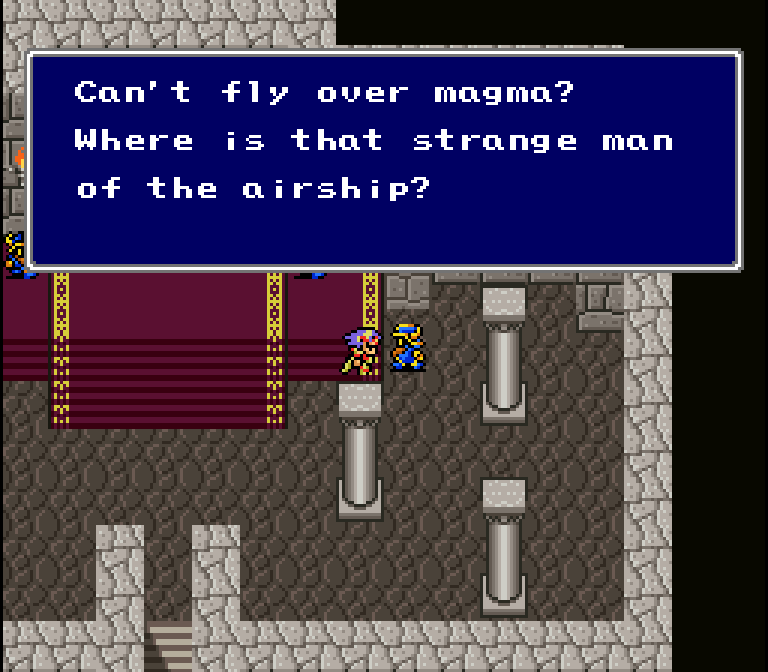 The confusion kind of makes sense in this case, though – since this entire place is already deep underground, what should the molten rock be classified as, lava or magma? Out of curiosity, I checked the other English translations, and most of them appear to use “lava” and “magma” interchangeably. The DS version seems to stick to “magma”, though, and the J2e fan translation seems to stick with “lava” instead.

Anyway, none of this is a huge deal or anything, but I bring it up because it’s a good example of how a single word in one language can encompass the meaning of multiple words in another language. When a situation like this arises, a proper translation absolutely requires context, otherwise all you can do is make an educated guess.

Edge and Cid meet for the first time, and almost immediately their personalities collide. In Japanese, Edge calls Cid a “geezer” or “old fogey” right off the bat. In the Super NES translation, he instead calls Cid a “chap”:

This change to “chap” seems odd to me – there are plenty of insulting words in English for “old man”, but “chap” certainly isn’t one that comes to mind. From my own experience, I know it’s sort of equivalent to “fellow” in some countries, and maybe “lad” in some smaller regions, but I don’t think I’ve ever seen it used to mean “old man”. But maybe that’s just my lack of knowledge of the word.

In the above exchange, Edge uses the Japanese pronoun ore-sama, which gives off a very over-the-top, “I am so great” vibe. There’s no perfect way of translating it into English, though, since we only have “I” and “me”. This is why I’ve added “the Great” in the sample translation above, and why the official translator added the word “renowned” into the Super NES translation.

Interestingly, the PlayStation, Game Boy Advance, and DS translations simply leave ore-sama as “I”, without trying to further convey the nuances of the Japanese pronoun. Perhaps the translators felt that Edge’s dialogue in general already conveyed the “I am so great” feeling well enough that further embellishment was unnecessary. Incidentally, the J2e fan translation goes with “the great”.

I love seeing how different translators handle ore-sama – it could almost have an entire dedicated article of its own. I think this translation choice in a fan translation of Final Fantasy VI takes the cake, though!

Rydia interrupts to stop the argument. Then Cid makes a certain remark:

Cid says “henpecked” in the translations above, but the actual Japanese phrase is an idiom that literally means “to be laid out under someone’s rear” or more loosely as “to be used as a seat cushion”. Like this, basically: 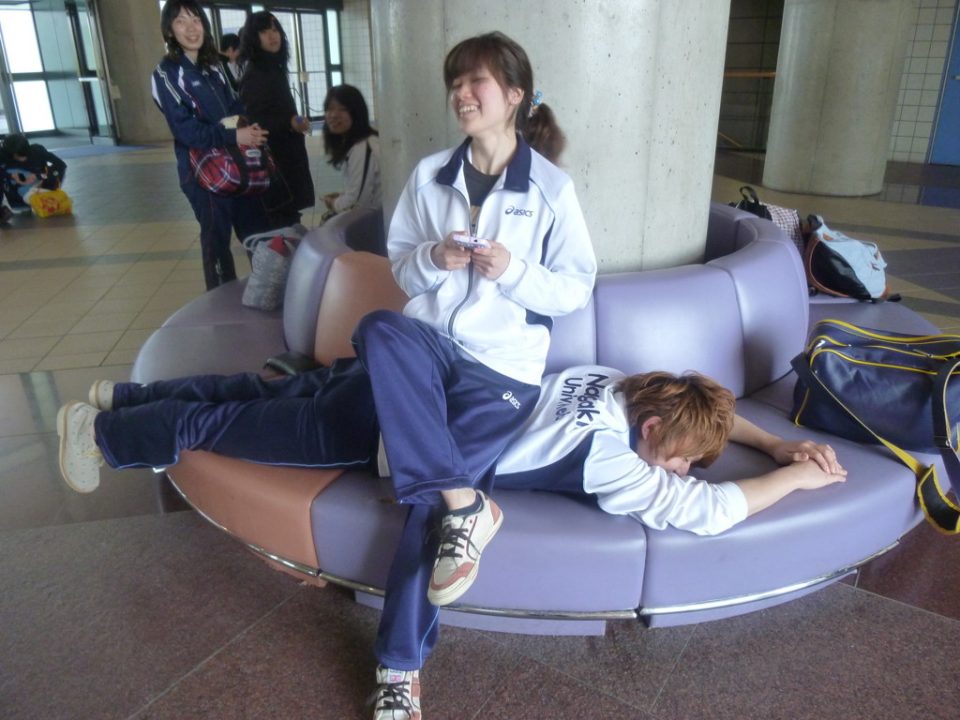 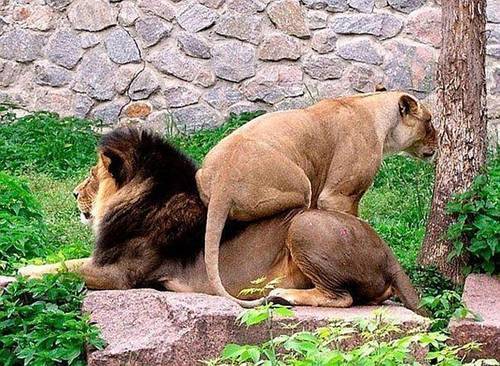 I only bring this topic up because it’s an interesting idiom in Japanese and I was curious to see how it was handled in different translations. Here’s what I found: 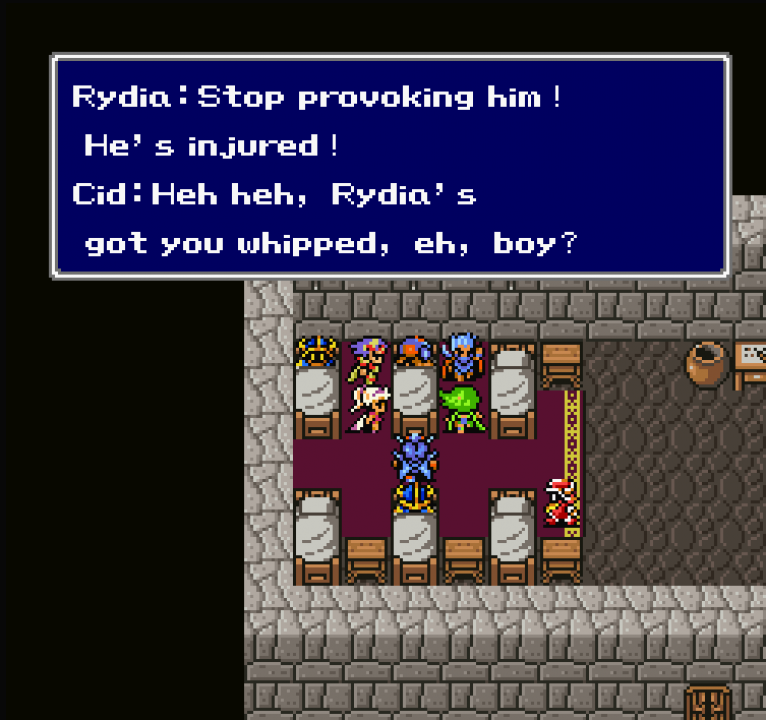 PlayStation version: "got you whipped" 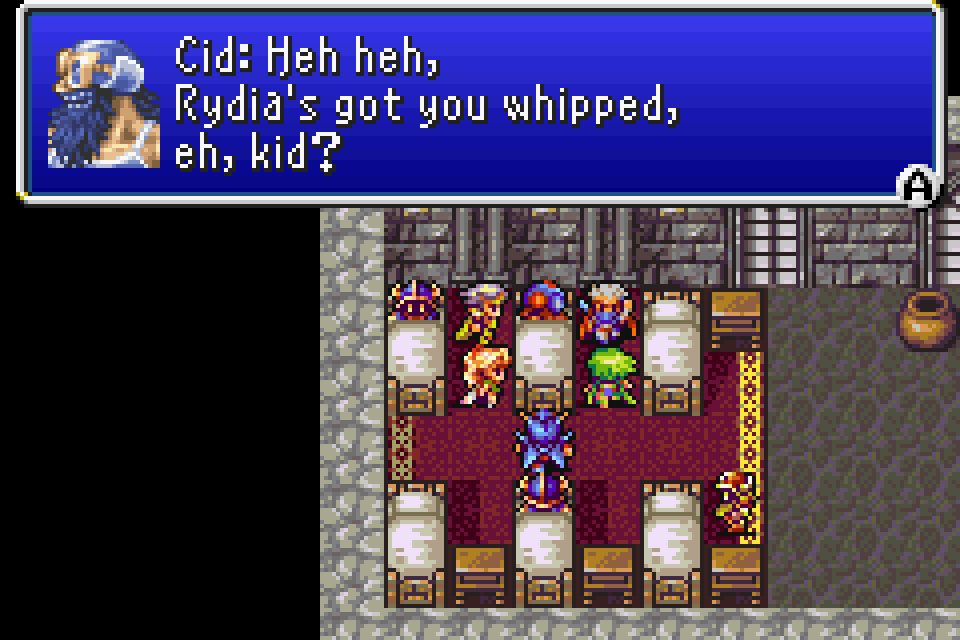 GBA version: "got you whipped" 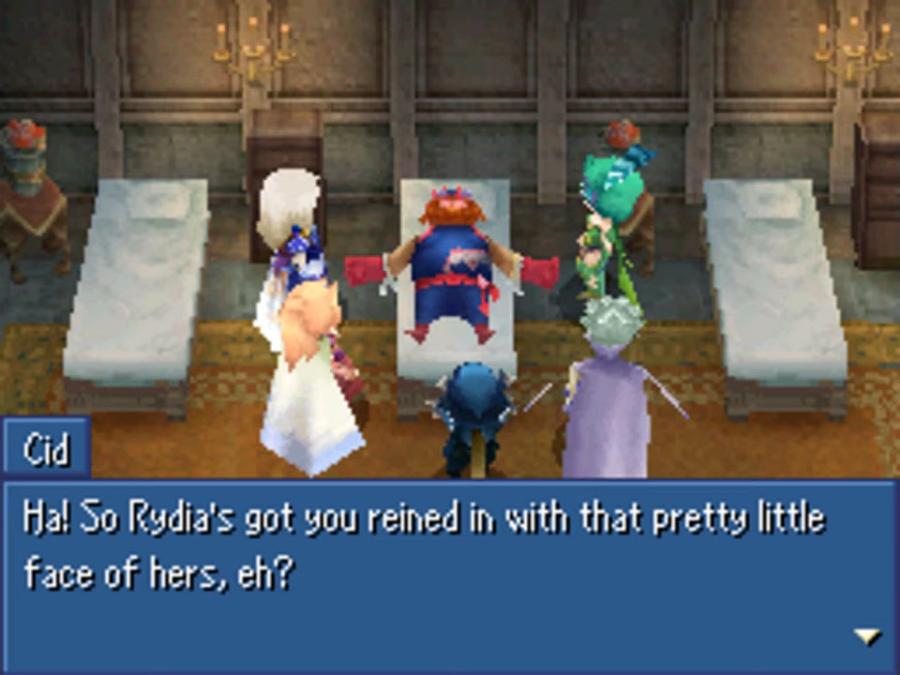 DS version: "got you reined in" 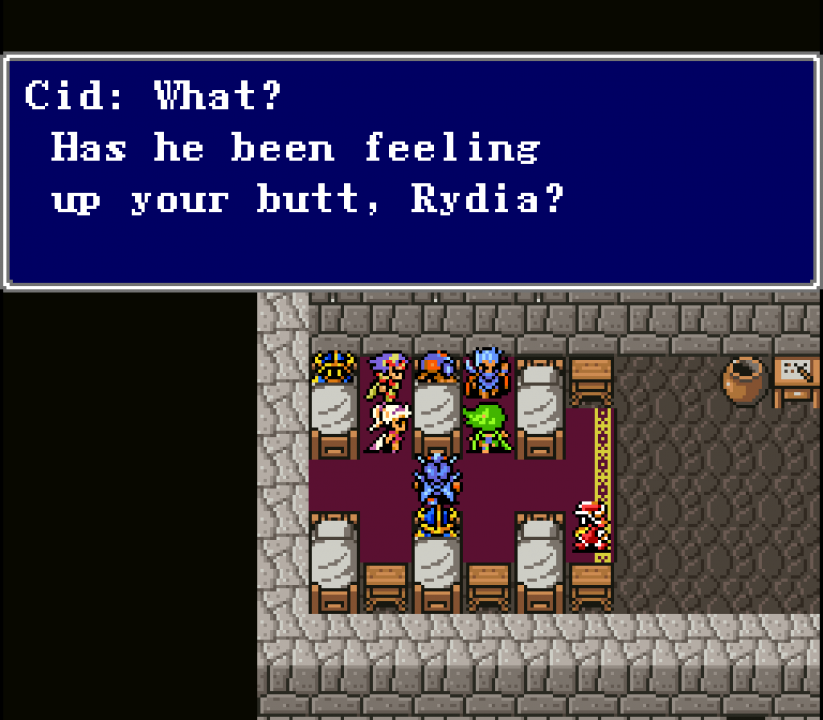 The official translations handle the idiom in different ways, while the fan translator seems to have focused on the “rear/butt” part without understanding the whole picture.

Despite his serious injuries, Cid offers to renovate the heroes’ new airship. His nurses are very opposed to the idea, however:

In the Japanese script, one of the nurses calls Cid an old man. Cid takes offense to this and responds that they’re old men too. He then forces them to help renovate the airship.

In the English script, the insult about being old was dropped, so Cid no longer takes offense at being called old. This change, along with the “chap” thing above, make me wonder if these “old man” insults were intentionally altered during the translation. It could just be a coincidence, though.